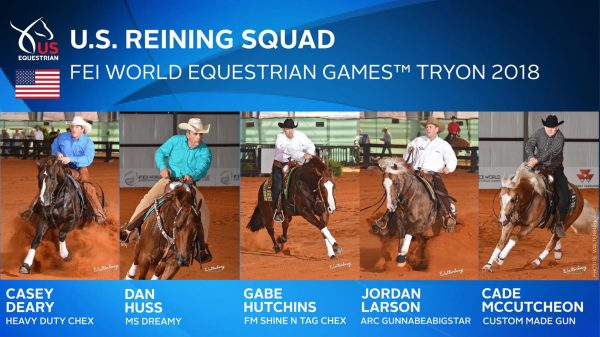 Gabe Hutchins and FM Shine N Tag Chex, a 7 yr old stallion, have been announced as the substitutes for Tom McCutcheon (Aubrey, Texas) and The Wizster. The Wizster, an 8 yr old AQHA gelding, sustained a minor injury in training and has been withdrawn from the The U.S. Reining Squad at the FEI World Equestrian Games™ (WEG) Tryon 2018 competition. Hutchins and FM Shine N Tag Chex were named as a reserve combination when the U.S. Reining Squad was announced in May.

The Wizster sustained a minor injury during a training session, but is expected to make a full recovery. After evaluation from the U.S. team veterinarian, and with the best interest of the gelding in mind, McCutcheon has chosen to withdraw The Wizster and not move forward with competing at the WEG.

Click here for a complete reining schedule and for tickets to the WEG.

Stay up to date on the U.S. Reining Team at WEG by following USA Reining on Facebook and US Equestrian on Twitter and Instagram. #USAReining and #Tryon2018.

Post Your Texas Horse Show
& Clinic Events on our Calendar!

Stay in the Loop! Join our FREE Update Corral Club!

We do NOT sell our list. We hate spam as much as you do!

TELL THEM YOU SAW IT IN THE TEXAS HORSE DIRECTORY!

We are a local directory for equine businesses and organizations in Texas. We are your completed online local Texas resource guide with Free equine business listings, horseshow and event calendar, articles, equine news, horse care and riding tips, and resources for horse and rider.